Swedish rock quartet Normandie have completed their December UK tour, which was co-headlined by former Yellowcard frontman William Ryan Key and was joined by solo sensation Grumble Bee. The tour was supported by the release of their new single ‘Pay For This’, which is their first production to feature new bassist Lucas Englund.
We reviewed one of their shows in Nottingham, then caught up with the band to talk about lots of things at the pre-show in Manchester. Thanks goes to the frontman Philip Strand for the interesting and enjoyable interview. 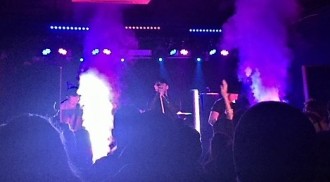 Normandie just never stop!
After a passionate and powerful acoustic performance from Grumble Bee and an experimental, story-telling solo performance from William Ryan Key, Normandie, a 4-piece band from Sweden, did no messing around and went straight into their powerful set after only a short intro. Their second song, ‘Awakening’ had heavier elements, completely winning over the crowd. Several songs later, all ranging from being technical and compelling to being aggressive and full of attitude, they play ‘Pay for This’, their most recent release with huge guitar riffs, making everyone in the room bounce and go crazy. Amongst ‘Pay for This’, ‘Ghost’ (2017) and ‘Collide’ (2016) both were played spectacularly with mesmerising strobe lights and smoke machines, making this small, cosy venue feel like an arena-worthy performance. Normandie must have thought long and hard about their set list to appeal to old and new fans. And for that, it was jam-packed with life and energy.

The quartet are clearly very dedicated and professional with their musical career and that came across with this gig. Lead singer, Phillip Strand, constantly interacted with his fans and looked totally comfortable on stage, as did the rest of the group, who inevitably enjoyed themselves. Either venues like the Bodega are familiar to Normandie, or they are just taking it at is comes, because they sure looked as complacent as you would be laying on your bed at home.

As well as being totally set in stone with the rock star lifestyle, they kept it real by being thankful for their fans and wanting to meet as many people as possible after the show. They showed a lot of respect to their support acts and complimented them on their amazing work (who also stuck around to watch Normandie and meet their own fans) and the crowd cheered uproariously in agreement.

After a long but entertaining night, everyone left with a bundle of t-shirts and albums in their hands, their hair in disarray and a smile on their face, a clear indication that Normandie are definitely worth seeing live.

So how’re you guys finding this tour so far, and how does it compare to the last UK tour with Yellowcard?

“Yeah really great! Smaller shows this time around because of the line-up, but still fun!”

Loving your new single ‘Pay for it’! However I’ve noticed the newer stuff is slightly tamer with less unclean vocals. Is there a particular reason for this? Was it intentional?

“Well actually from the beginning our album, Inguz wasn’t even supposed to have screams either, because we didn’t really want to continue with that kind of thing after the line-up change, so I (Phillip) had to fill the shoes left by our last vocalist, so I just ended up having some fun with it really, and seeing what worked and what didn’t! It may come back for the new stuff, who knows, but sometimes it feels like a guitar solo in the way it’s not always needed, you don’t want it in every single song.”

Whilst we’re on the subject of Inguz, any plans for a follow up in the form of an new EP or album?

“Of course! We’re aiming to have something out in 2018, but in the meantime we’re definitely thinking of releasing a cover, or some acoustic versions of songs from Inguz, maybe not even acoustic but just alternate versions of songs you’ve heard before, just to hold people over until the next LP comes along!”

So in terms of writing, how far along is this new material?

“We’re actually about 25-30 demos into the writing process, obviously it isn’t going to be that long, but we’re not even done yet! After this we’ll probably settle on maybe a final 15 that make the final cut.”

So Phillip, I remember I watched a live Q&A you did over Facebook earlier this year discussing the album and your favourite music. You recommended the 80’s synth-wave style band ‘The Midnight’, who I’m now really into. That’s quite the genre leap! How much of this kind of music affects the songwriting of Normandie?

“Well pretty much just me staying up all night making synth patches. As far as affecting the songwriting, I think that’s always been a part of it as I’ve always loved that kind of stuff. It’s not always that I’m influenced directly by it, but it’s just enjoyable to listen to, especially the melodies, which play a big part in my our sound”

“We LOVE the UK bands right now! Nothing But Thieves, Muse, Royal Blood, Casey, there’s just too many to name!”

Inguz is a Norse rune meaning “The Seed” right? So looking into the future, is this a concept or part of theme for your future releases, with Inguz being the first chapter in a series of albums? Was that part of the thought process?

“We started discussing it and were thinking to ourselves “should we find a new rune for the next release?” We’ve dropped the discussion for now but it’s still on the table I guess, we’ll see how the album feels and go from there. If it feels right, It might work, but at the same time you don’t want to put yourself in a box, you know? You can’t force it.”

So you’ve been on multiple UK tours now, how does the music scene here differ to the one back home in Sweden?

“It’s actually quite different! It feels like in the U.K. people aren’t afraid to be fans, and are just proud of the UK scene in general. They’re very welcoming too, especially in these smaller, intimate venues, it feels like they’re not scared to show support which is amazing.”

Favourite show of tour so far?

Okay guys, that’s pretty much it, thanks so much for your time, anything you want to throw in there?

“Big news… no, HUGE news coming next year, we can’t tell you anything more at the moment but it’s going to be amazing, stick with us…”