The Harriets are coming to London!

The Harriets are returning to London at the end of October to play a special headline show, supported by the team at Banquet Records, and the band love for you to come by and see the show, maybe a bit of dancing too! If you enjoyed their album released last year, why not hear it live. Following their sell-out show in Kingston in 2019, The Harriets are hitting London again.
Saturday 30th October 2021 – Doors at 7.30pm
St John’s Church, Kingston, KT1 2SU
with support from Alex Hall and Denney
Tickets: Click here

If you can’t make the 30th, the band will also be playing an acoustic show at The Bedford in Balham on Wednesday the 27th October. There’s some more info here: The Bedford, London

REACTION Roster Showcase to kick off 2021!

Covid-19 permitting, Reaction Management will be kicking off 2021 with a weekender showcasing their full roster. 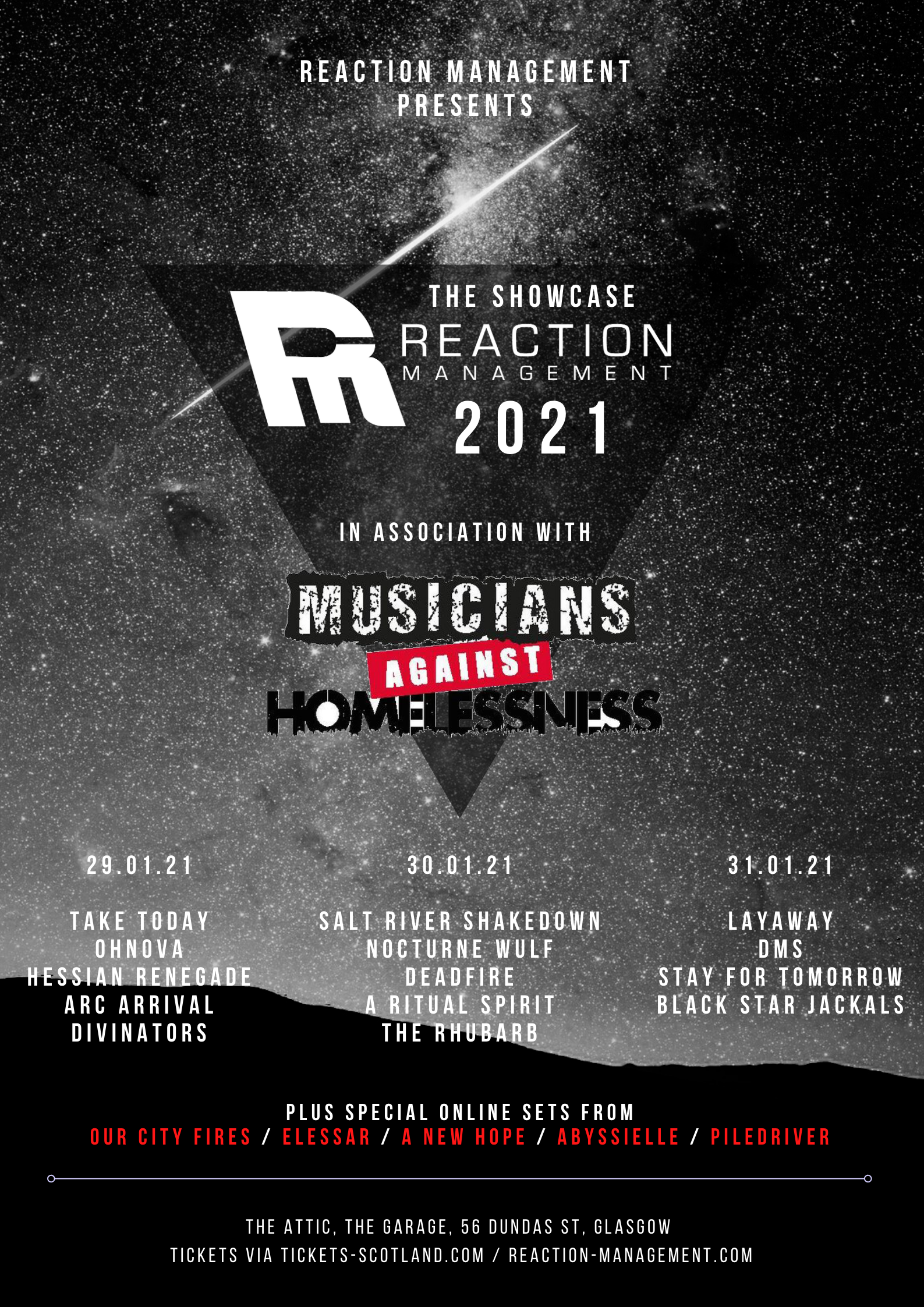 There will be 3 live shows in Glasgow featuring their Scottish based artists, and they will also be live streaming performances from their bands in England and the Philippines!

You can check the full artist info with social media links, bio and videos via Click Here

Tickets for the event are available via Tickets-Scotland.com and Reaction-Management.com priced at £5.00 per night or £10.00 for the weekend throughout.

Proceeds from the event will go to the CRISIS charity in association with http://www.musiciansagainsthomelessness.net/.

RADAR Festival has announced its final wave of bands for their 2021 edition.

The majority of previously-announced bands will play on the rescheduled dates. To support the festival a crowdfunder has been launched, which will see 20% of proceeds raised being donated to RADAR‘s crew.
Visit the crowdfunder here: https://www.crowdfunder.co.uk/rdrfestival

The new dates of RADAR Festival will be 30th and 31st July 2021, two years on from the highly successful inaugural edition.

Bands performing at RADAR‘s second edition include: Dirty Loops (debut UKperformance), Haken, Sleep Token, Conjurer, and Phoxjaw, and continues to mark this festival as one of the most exciting new music events in the UK.

RADAR FESTIVAL organisers comment:
“It’s great to finally be able to share our updated line up with everyone!
Ever since INTERVALS couldn’t make our 2019 edition of the festival, they’ve been an act we’ve wanted to get back as soon as we possibly could.
And with Plini no longer able to make next year, we really thought the timing and fit was just right.
The addition of Daniel Tompkins performing his first ever live show of his solo material was also a really big thing for us. The album is already unique and to now know UK virtuoso and composer Chimp Spanner is joining him on stage only excites us more so.
Palm Reader are slowly becoming one of the UK’s hottest new experimental acts. Touching on a few genres with their complex but organic sound means we think they’re one of the coolest bands to embody what RADAR Festival is about.
And lastly, Entro-P are local favourites that took a break quite a while ago but we know there are some older (people in their 30s) attendees that are glad they’re coming back. And some younger members of the RADAR community will be pleasantly surprised too!
We’d also like to thank everyone for their help and support with our Crowdfunder which draws to a close soon. We cannot believe the amount of love people have shown us as a festival, despite its infancy. That’s been really bewildering for all of us. And we’re so close to our goal too! 2020 has sure had its downs but it’s paved the way to a fantastic 2021 for everything we’re trying to achieve.“

With their mixture of international talent and confirmed homegrown success, RADAR Festival position themselves as champions of forward-thinking guitar-led music. Launched in 2019 to acclaim, with performances from Animals As Leaders, Agent Fresco, Rolo Tomassi and more, the new festival is already making a claim as one of the UK’s most exciting progressive music events.