The fresh-faced pop punk quintet Two Year Break are from the suburbs of London. They have been on the London/Essex live scene for quite sometime now. Since the band announced the new lineup in March 2018, they have never looked back and 6 months later the band released their debut single “Change My Mind” under the current lineup.

Two Year Break released their 5-track debut EP “Sell Me Fate” on 30th August this year following the release of the two singles which are included on this EP.

They open with “Daltite”.  After a short mellow intro, a raucous vocal brings a fast pace and a refreshing sound. The quintet show off their ability for making stunning harmonies and highly appealing guitar riffs. Great start to the EP!

“Alone in the Ocean” is the second track. It is a very clean tune, and beautifully crafted. The song is sentimental and the high-note vocals are effective. The closing part is a gentle instrumental section with a narration that I feel is a touch too long. This is only my criticism.

The third track is “All I Want”, the band bring the bouncy pop punk sound back with great harmonies and great riffs again. Also there are some noticeably showy pieces with the bass and drums, which are enjoyable, as well as demonstrating the energy in this song.

Two Year Break move on to the fourth track, which is “Passing By”, a duet with a guest female singer Lily-Ann. She has a distinctive voice, which has both strength and a wide range. Her voice blends well in this melancholic yet heart warming song.

The fifth and the final track is “Lost My Way”.  The catchy intro definitely brings you into the song. It makes you feel that you wished you were at their show singing along. It is a big pop punk song in which you hear the depth of their sound behind the melody line.

The band have made sure to include a contrast within the EP, and in doing so have created a quality set. Two Year Break are ostensibly a pop punk band, although their sound goes well beyond the pop punk genre. This EP “Sell Me Fate” definitely needs to be heard by wide audience. 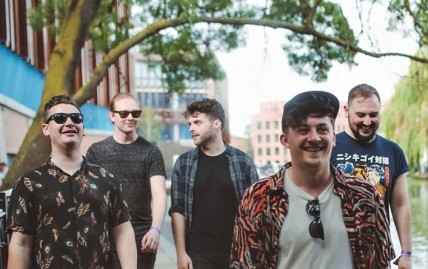