Young At Heart are a five piece pop-punk/rock outlet from the North-Eastern PA, and were founded in 2008, as the result of struggling musicians who needed a reason to make music again.
The band released their debut album “This Time’s For Real” in 2009 under a former name, and spent the following year and a half doing their best to keep that name spreading through the east coast. Following the release of their EP, the band played shows with notable acts such as New Found Glory, Cartel, Title Fight, Hit The Lights, Set Your Goals, Four Year Strong, and many more. They were featured on the hometown Warped Tour two years in a row, and produced two small tours along the east coast.
After almost two years of minimal activity, the band regrouped, changed their name, and secured their lineup.
Young At Heart came back stronger than ever with their self-titled EP released in September 2013. Young At Heart quickly began to buzz amongst their fan-base, who were happy to see that the band had rebranded and were back in action.
With a fresh sound and new found motivation, Young At Heart are back for a second round, with no intentions of slowing in the near future.

Just over 3 weeks ago, this blog featured Young At Heart in the short post “USA Pop Punk – Young At Heart – prologue“.  This time, Young At Heart kindly spent their time for answering my questions.
I asked them what I would liked to know most.

MM: Hello! First of all, can you introduce yourselves? Your names, your parts in the band, hobbies, interests, that kind of stuff.

YAH: My name is Chris Ventura and I play guitar alongside Eddie Collins, who is our other guitarist. Then we have George Yurchak on vocals, Jerry Bruno on drums, and Kyle Williams who plays bass.
As far as interests and hobbies, I mean we all work full time and have a lot going on in life, so stepping away from that and just being stupid guys hanging out together and jamming music is pretty important to us. Collectively most of us are big hockey fans, other than Kyle who’s a huge NASCAR dude. We all have our little things though. Kyle and I are big into graphic design, George has a recording studio; we’re just always staying busy and trying to drain every minute out of life that we can, you know?

MM: Yes, that’s understandable.
I have noticed that you were hockey fans through  social media.
Well, I am aware that your lineup has changed. Has it changed your direction as a band?

YAH: The first year or two as a band we had a lot of changes to find the right chemistry. George and I are technically the only original members, but Kyle and Jerry have been with us since like 2009/2010 so they’re “original” as far as I’m concerned. Then about two years ago we had a mutual split with our one guitarist that was with us for a while, and we just started losing motivation and getting bummed out. We actually considered calling it quits at one point, thinking that we wouldn’t be able to recreate what we had, but fortunately our good friend Eddie came into the picture and basically reignited the flame for us. I would have to say a new addition to the lineup absolutely changed our direction for the better. Not because the previous lineup was bad by any means, but because we fell into a bad spot trying to make a 4 piece work, and it was just a refreshing change and burst of energy to have another person to make things work again. I wouldn’t say our style of writing has really changed because of it though. Eddie slipped into the role pretty perfectly and we couldn’t be happier.

MM: Oh, I’m so glad you didn’t call a day. And I’m very happy to hear Young At Heart are working well together.
Could you tell me how you go about writing your songs?

YAH: Previously George wrote a lot of the main riffs and then would bring his ideas to practice for us to pick apart and produce. He would basically have a concept for a song and play a verse and chorus and such, and then I would throw in a bridge or Eddie would write a lead over it, and then Kyle and Bruno would toss in ideas. Everything came together in a basement after we jammed the same riff over and over again until we liked it. Now though, we’re all a bit busier so I think it’s shifting to more of just George and I demoing ideas and emailing them to the rest of the guys to listen to and brainstorm. We’re just starting the writing process for this next release so, we’ll see how that changes but that’s the direction it’s headed.

MM: I am super excited hearing you are staring for new materials.
Do you personally have a favourite song that you’ve written? Any reasons for that?

YAH: Personally I think “If Daryl Dies, We Riot” is up there for me. That song was 99% finished at LEAST a year before we recorded it for this EP and yet I hated it so much because we could never get it to a point where it felt done. After writing so many different versions of it, we changed the stupidest simplest thing and suddenly it just worked perfectly. So I think the journey itself in getting that song to 100% is why it stands out as a favorite to me now. It was such a hurdle to finish it, but such an accomplishment when it was completed.

MM: “If Daryl Dies, We Riot” is my favourite too. I didn’t relaise this song has gone through such a hard labor.
Change the subject, when was the last time you toured?

YAH: It’s been like 3 years and we hate it. Aside from our schedules, we have pretty terrible luck with transportation. The last tour we had we broke down 3 times in less than two weeks; once 45 minutes from home as we left Warped Tour, and then twice within 10 miles of each other. Our current van was running good for a while, but I don’t know how many trips are left in it. We can never just get ahead enough to invest in something reliable unfortunately. Story of every band’s life though, I’m sure.

MM: … It wasn’t a nice experience for you. And yes, I hear something similar time to time. We need to get you something better to travel with!
Well, apart from your home state, where do you like to perform? Do you have any memorial moments? I’m sure you’ve got one or two hilarious stories to tell even you hated touring!

YAH: I think for a while Binghamton, NY was more of a home to us than our own home. We had some killer shows up that way and there were always a ton of kids coming out to support every band. Which speaking of Binghamton, I think most of our memorable moments came in the summer honestly. I remember playing this one Binghamton Firehall often that had pretty much no ventilation, so we would play there on a 90+ degree day and just opening the door to the place would make my glasses instantly fog up. I must have sweat off 20 pounds every time we played there. But I mean, back to back summers playing our local Warped Tour, having some promoter we had never met before in Virginia treating us all to the movies after our show, packing 6 guys and all of our equipment in a conversion van with no trailer for a week on our first run… there’s a lot of nostalgia associated with the summer for us. We’re fortunate enough to have shared in a lot of really cool moments, and if this band broke up today at least we could say we had a great run and a blast doing it. Although, there was that time we broke down on the highway for an hour or two at 1am in −7 degree January weather. Classic Young At Heart.

MM: Thanks for sharing your memories.
I hear that you are organizing your next tour. When are you planning to head out? Are there any places you already have in mind?

YAH: The past year or so has been good to us with making friends all over, so it’s going to be hard to find enough time to hit all the places we want to visit, but we’re going to do our best. We really want to spend weekends doing runs to anything within like 10 hours of us, places like Massachusetts, Virginia, Maine. Ohio is a big one we need to get to soon, and then we’ll save a couple weeks to try and get down to Florida or maybe head west for once. We always hug the east coast of the U.S. but I’d like to get away from that a bit. Canada would be nice too, and obviously the UK one of these days, right?!

MM: Absolutely! We love you even more for that.
Your self-titled EP was released over a year ago. You mentioned that you were starting to write new material. Are you planning to record some new material soon?

YAH: We’re actually doing pre-production right now. We probably have 75% of it generally written already, we just need to organize our ideas and riffs into something more substantial. The game plan is to put out a full length by summer, but we haven’t finalized a date or anything yet since it’s still early.

MM: For sure. But I can’t wait for the summer.
Also are you thinking to make a new music video, or maybe some video diaries?

YAH: I’ve wanted to do a documentary style video for a long time now. I want to try and get something set up during this upcoming writing/recording process. I always enjoy watching video diaries of bands in the studio or tour videos and such. I don’t know that we’re nearly as interesting, but it’s on my bucket list for sure.

MM: I’m sure it will be very interesting to watch.
Is there anything else you would like to say?

YAH: We just really appreciate everyone that takes time to listen to our music or reach out to us and say hi (Twitter: @youngatheartpa, hit us up!). We wish we could be touring full time and stop at every city on the map, but it’s just not something we can make happen right now. It’s not the same as a face to face interaction, but we try to at least get to know everyone as much as we can through social media. As much as the internet has “hurt” music, it can be the greatest tool ever. I mean, we’re talking to you right now because of Twitter. I’m looking out my window at this ridiculous Pennsylvania snow falling from the sky while people from Las Vegas and Atlanta and freaking Ireland and England are interacting with me and talking about our music. So we’re incredibly thankful for that and try to use it to our advantage when we can’t be on the road. And to all those that bought our album, thank you! If you haven’t picked up a copy yet or don’t have the spare cash, you can stream it online or just steal the tracks from a friend if you have to!

MM: Thank you very much for answering all the questions. I feel I now know about Young At Heart a lot more.

“If Daryl Dies, We Riot”

If you missed the prologue post, the direct link is here; http://musicmattersgb.net/2015/01/06/usa-pop-punk-young-at-heart-prologue/ 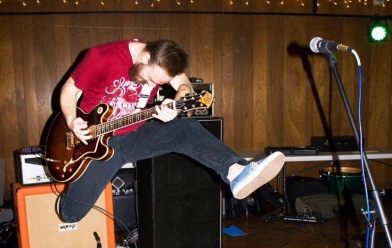 One thought on “USA Pop Punk – Young At Heart”