Today, I am very happy to share the music from my local area.
The new UK pop punk band With High Regards have just released their debut single “Enigma (We’re So Sorry)”  and they are preparing for their forthcoming album.

Their debut single “Enigma (We’re So Sorry)” begins with nice acoustic guitars; then a gentle vocal joins in, followed by a sweet melody of the voice. The tune gradually transforms into what is called pop punk. From there on, they give a slightly sentimental UK sound till the end. Normally this kind of music is around 3 1/2 minutes.  This song is 5 minutes and 54 seconds, but it doesn’t feel so long. It is an enjoyable piece to listen to.

With High Regards are a three piece Pop Punk band from Southend-On-Sea in Essex, England.

With High Regards were formed as a band in 2010 under the name of FreeAm.  They have released three EPs.
They have performed in live shows locally, in Southend, Grays, Brentwood, Rayleigh and Leigh-on-Sea. Along their gigs, they also made appearances on many radio shows around the area, performing live acoustic sessions to accompany brief interviews.
Since changing the band name to With High Regards, their ethos is all about having fun and giving it all they have. Their inspirations include bands such as; The Story So far, Knuckle Puck, Mayday Parade, Four Year Strong, and Neck Deep. 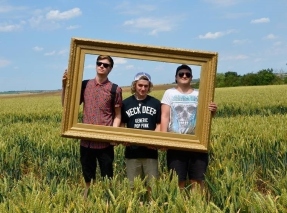 With High Regards will have a show on 12th March at the Unicorn in Camden, London.
Also they will be taking a part of the Battle of the Bands on 14th April at Asylum in Chelmsford, Essex. I am looking forward to seeing them performing live soon.