Hailing from Southampton, the south coast of England, Slackrr are one of the most active pop / punk (or pop punk if you prefer) outfits today. The band was originally formed in 2017. After a couple of lineup changes, they are now more focused on their direction. Slackrr are ready to take the next step in showing the world what they are made of.

Recently Slackrr premiered the new single “I Know”, and it was physically released along with their previous singles as their debut EP. The words of this song “I Know” are simple, but the meaning is deeper and more powerful than just the words themselves. “I know that things will get better we’re in this together”…, this song is an inspiration about life. No matter how hard life gets, and how tough times are, you can get through anything if you have a group of friends, family or a community by being together. The front-man Scotty hopes that everyone has those people in their life, and this song is for his band, for his friends and for all their fans and audiences. The song is a positive message with an uplifting sound. They are a likeable bunch and very engaging with their fans and listeners alike.

Recently the trio have sat together and answered my questions. Get to know Slackrr better!

Hello, Slackrr! Great to have you today. First of all, could you introduce yourselves?

Thank you. Could you tell us how you all met up and became a band?

Scotty: Cait and I were friends. And she had come to see the band play the first couple of shows. As the band started getting busier, the drummer and the bass player couldn’t commit the time needed to the band and decided to call it a day. So I spoke to Cait and she told me she wanted to come play bass. Then we put up an advert looking for a drummer, and Connor replied. And here we are now.

Cait: Why not? haha.

Scotty: The name was something I had for a while, because of the definition of someone who doesn’t try hard, avoids work and slacks off. It’s an american term more really but I just kinda liked it. The spelling was an inside joke initially but we kinda liked how it looked when we had the logo designed, that sealed the deal.

Connor: We aren’t all the domain names available as well?

Scotty: Haha yeah! well I mean that was a nice coincidence.

Nice.
Who are your influences? Does everyone listen to similar music and bands?

Scotty: We have a wide variety in music…. I’m sure that’s the most cliche answer ever but we do. Some we agree on and all like, some we definitely do not.

Cait: That’s not really answer, is it mate?

Scotty: Haha I guess not, if we listed all the bands and music we like we’d accidentally miss something off anyway. We’ll just say we all like Punk and rock yeah?

Okay. You just dropped the new single with releasing the EP physically. You must be excited!

Scotty: We couldn’t wait! we’ve been sat on a whole bunch of recordings which make up this EP and our upcoming album since October. So we’re really excited to be able to show these to everyone!

How would you describe the new song?

Scotty: “I Know” has one of the more positive and what we feel important messages on the whole record.

Connor: It’s something we all believe in strongly.

Cait: It’s a message of hope.

Scotty: The whole song is about when times are tough in your life and you just feel like giving up that there is hope, there is a reason to carry on.
For us as a band collectively or individually the message is straight forward like the lyrics but powerful “I know, that things will get better we’re in this together”

It’s about when times are tough if you have a strong group of friends, family or a community that if you all stick together you can get through anything. Supporting each other! There is always light at the end of the tunnel, and we hope everyone can identify with this in some way, shape or form.

Thank you. How do you normally go about writing your songs?

Scotty: When the band started, it was me writing everything and coming in with a bunch of songs that were pretty much complete from start to finish. Then as times gone on, we are experimenting with different ideas and working things out in rehearsal a bit more.

How important are the lyrics to you?

Scotty: For all of us, they’re really important. I mean most of what I’m writing lyrics about are observations on life how people treat each other, situations etc that can all be fairly universally relate-able like you’ve either had that situation or experience your self or seen someone else go through it.
I quite like writing lyrics that can be open to interpretation. So they may mean one thing to me but someone else reads into it or relates to it in a different way.

Cait: Or you’re just being sarcastic!

Scotty: Haha I think what Cait is referring to is how everyone on first listen though Closest To Perfect and Lessons were love songs, haha.

Could you tell us about your limited copies of your EP?

Scotty: The EP was done as we’d released singles online with music videos, but never had any physical release. So our management suggested the limited run as just a thank you for anyone who has supported us in the last year and may have wanted a physical copy of a CD from us.

Did you have a special show for the release?

Cait: We did! We actually had a show booked on the Isle Of Wight on the day the EP was released. So we called that the release show, and it was absolutely amazing!

Connor: We had a packed out Strings Bar and Venue in Newport IOW. There we mosh pits, circle pits singalongs everything we could have wished for, and more.

Scotty: We’re from Southampton, so it wasn’t even a home town show. So we were absolutely overwhelmed and so grateful that many people turned up and were so into it. We feel very lucky.

Awesome! Well, what should we expect from your live shows?

Cait: High energy shows, fun, a lot of love in the room and us giving 110% for everyone there!

Super! What has been the highlight so far?

Scotty: Being able to play music with each other as friends and being able to share that around the country to rooms full of amazing people!

Is there anything you would like to say? Final words!

Scotty: This has been the craziest and most fun year. In 2018 we played around 100 shows, and have just had the time of our lives playing our music and meeting amazing strangers along the way we now call friends.

Cait: We are so grateful and just want to thank you all!

Fantastic! Well, thank you for your time! And good luck! 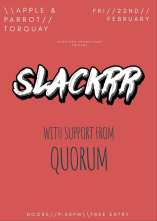 There are loads of shows coming up. Keep your eyes on their announcements and make sure to join them when they come near you!!!
Their next show is on Friday 22nd February at Apple & Parrot, Torquay, then they are back in London on Saturday 23rd February at The Engine Rooms. 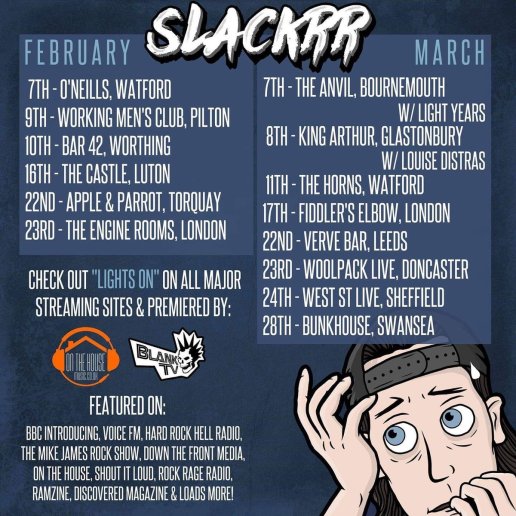