US metalcore The Word Alive recently toured in Europe and the UK to celebrate their 10 years as a band. During this tour, the Phoenix-based quartet Tyler “Telle” Smith (vocals), Zack Hansen (guitars), Tony Pizzuti (guitars) and Matt Horn (drums) showcased their new album ‘Violent Noise’ which was released on 4th of May this year. The band revealed the album with the first single “Red Clouds” in March 2018. The second single from this album, “Why Am I Like This?” was released and was supported by a music video in April 2018. Later on, the band explained; “Violent Noise” as a whole is about all of the crazy shit that happens in your life, and how everything we do just gets filtered by our hearts and our minds. We have trouble truly processing so much of what happens, and we end up just burying things to cope or move forward day to day. Eventually that can begin to eat away at a person, and it personally took it’s toll on me over the years, especially the last two. Everybody has things going on that are unspoken and if left unchecked it can creep up on you.”

Music Matters had an opportunity to meet up with the vocalist Telle just before The Word Alive‘s show at Underworld, Camden on 23rd of May. We thank Telle for taking his time out and being interviewed by Jack Wood.

Jack: How do you feel things have changed since the first album ‘Deceiver’?

Currently what defines you guys? I mean, I think the same thing is meant to be defined the whole time which is y’know…

The band is not any one person and it’s kind of just an idea. And you know a community that we want to project. We want people to come to a show and feel good, feel happy, everyone could really get out of their heads and embrace living in the moment. That’s really what we’ve been about always. Sonically, song to song, we’ve never really been the same. Even from our EP to the first record Y’know, we had ‘You’re all I see’ and then you have epiphany. So y’know, like we’ve always been a very extreme band I think as far as being willing to push our boundaries. Really, it’s just Theresa no rules really, we want to make music that we love and that we’re passionate about. If we’re passionate about it 10 years from now, cool. If we’re passionate about it in 5 years, cool. And hopefully fans are as we are.

I notice you released an album recently, but do you have plans to begin working on new music?

We already started writing. We’ve been a band that always writes. We’ve always written year-round, but we are writing a little bit more conscientiously this time. Like alright let’s try to find the best sound for this record, because we would never want to write the same record twice. So, we’ve already started writing, so I would imagine that by the end of the year or early next year you’ll hear at least something.

Cool. The latest album ‘Violent Noise’ that just came out, what 3 words would you use to describe it?

Deeply personal and energetic. Every song has a lot of energy in it, and it’s a different energy song to song, and then it’s the most personal I’ve written as far as lyrical content goes.

A lot of people that see interviews like this are from smaller bands and interested in the music industry. What would you say to those people to drive them to get them to a better point in the industry?

I think really engaging your fans and being appreciative of them in every way. You’ll gain fans, you’ll lose fans, some will come and go. But the ones that are really passionate about your band, you’ve got to really engage with them because it’s a special feeling. Really practice the art of song writing. Try to write the best songs you can which you feel represent you in the best light. Ultimately, it is a business, so making smart financial business decisions early on. So that you don’t have to deal with those things later in your career. Always try to think 5 to 10 years ahead. You do those things and try to have as much fun along the way.

Yeah, I mean a lot of things, I guess. Just life in general I think, y’know, right now is kind of a crazy time in a lot of places around the world, like over here there’s Brexit and there’s an election in Australia right now, there are different laws getting passed around the world that feel like we’re going backwards almost. So, I’m trying to learn more everyday about things that will not just impact me and my friends, but things that will impact future generations. So yeah, that’s something I’m beginning to be more passionate about.

What are you listening to that’s inspiring you currently?

I listen to a lot of stuff, outside of metal. James Young, from the UK. There’s Tyco. Always. Olivver The Kid which is a friend of mine, Bryan Sammy is who used to be in The Neighbourhood, it’s a solo project. He also has a new band and just released a record which is sick. So quite a bit of pop? Yeah, I love melody. I’ve never been a fan of overlay heavy just for the sake of being heavy. I do think sometimes it’s fun like I love Emmure and Frankie’s my boy. But I like Emmure more live because I think it’s just a whole other world.

From this tour, what are your favourite moments?

We’ve had some amazing shows. Every show has been good. All the bands get along super well as well, it’s been a very tight tour which always makes it very easy. We basically just have fun and take care of each other. It’s been one of my favourite tours. We’re all about each other and hang out. It’s not like every band goes and does their own thing. We all hang out every single day.

Great. How has this European tour been and where was the best show?

The best show was Helsinki. It was unreal. It was the biggest European headline show we’ve done. And for it to be so far away from where we were made it extra special. The venue was huge, the lighting was crazy, and all the bands had a good fan reaction, so it’s like the whole tour was really buzzing and had a good time. It’ll be tough to beat, but if anywhere can do it, it’s London. I expect tonight will be sick.

Our live review at Underworld, London will follow in next article. 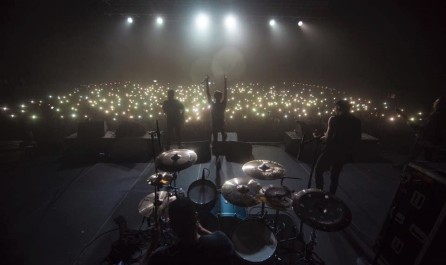 One thought on “The Word Alive – Europe/UK Tour Interview”