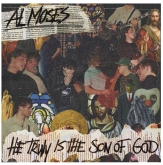 Hailing from the south of Wales, Al Moses are a four-piece rock band formed in 2015. They have been active on the live scene, and the UK tour was planned in April to celebrate their new single, but it’s not going to happen unfortunately because of the Coronavirus.

Today Al Moses released their new single “He Truly is the Son of God”. It is their first single since “Taxidermy” which was released in June 2019. This new song is so uplifting, you can feel their energy and you will be singing along once you learn the lyrics. The quartet made the song quite simple and it has an appealing rock sound with a punk flavour. One of most noticeable elements is the fresh and captivating guitar sounds.  “He Truly is the Son of God” is a new rock’n’roll anthem for the 21st century.

The band talks about their generation who have watched the last rock stars rot away, and are just left worshipping the grassroots heroes who play local venues every weekend. “The song was written when we were 18, having the time of our lives and
getting pissed at gigs in Cardiff. It acts as a reminder of the importance of our small and beloved music venues, especially those on Womanby Street where we grew up watching bands in Wales.”