Reign Eternal is a new progressive metal/melodic metal band based in Exeter, England. They released their long waited debut single “Bloodwater” 2 days ago.
The track begins with gentle vocals accompanied by dreamy guitars. As you know this is a metal band, so this has the feel of something like the calm before the storm. Just after the 70th second mark, it happens. The tune changes to appealing, quick guitar lines, which are joined by melodic clean vocals, which then lead into unclean vocals. The track is supported by a distinctive drum part and a slightly modest bass all the way through. On the whole, the sound is more mature than what you might expect, but carried by their young energy. Listening to one of their tracks properly recorded for the first time, Reign Eternal makes me smile. I am happy to say this very young band Reign Eternal has a great future.

If you prefer to listen to the track on YouTube;

It must be about 8 months ago that Reign Eternal introduced themselves to me. At the time, they casually told me a rough outline of their future plans, and there was no recorded music to listen to. But I had a very good feeling about them. So, I quietly kept my eyes on them. About 3 months ago, it was a joy to watch the footage of their recording session. Now listening to their debut single is very exciting.
Reign Eternal is currently recording their first EP which will be released late August. I cannot wait to hear the sound!
Reign Eternal are trying to do something new in the metal scene. They are looking to perform more live shows and to progress as a band and as musicians.

If you want to know more about Reign Eternal, click the links below; 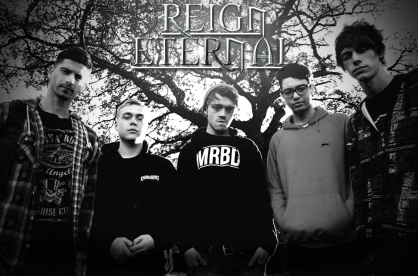