Hailing from London, Lilith and The Knight are set to release their official debut single on 22nd April. We have just interviewed the band, which you can find below.

Lilith and The Knight are comprised of the salacious and mesmerising Lilith on vocals, the sizzling dual lead guitar talents of Adam and Stephen, and the grinding heavy rhythms of Tom and Francesco, blending together to create a refreshing distinct and unique sound.

“Wake Up” begins with solo guitar riffs which is followed by a heavy roar and other instruments as the guitar riffs go on. Slightly soft and clean vocals join to lead the tune. The track immerses you and when Lilith hits the high note, you realise that you are really  into it.
They are influenced by many great classic rock bands. With their wide variety of influences, they create their own sound and bring something fresh to the metal genre.

“Wake Up”  behind the scenes (Teaser)

Hope you enjoy the interview;

Hello, Lilith & the Knight! First of all, could you introduce yourselves?

Hey! We’re a female fronted hard rock / metal band from London. Lilith is on vocals, Adam and Stephen are on guitar, Tom is on bass, and Francesco is on the drums.

Could you tell us how you all met up and became a band?

About a year ago Lilith decided she wanted to start a rock band. She called Stephen, who she has been friends with for years, and asked him to join. Then she put an ad online and held auditions. That’s really how we formed. It’s weird how well we all clicked. It feels like we’ve known each other for years. We are like family now.

Great! How did you decide on Lilith & the Knight as your band name?

Lilith is actually a female demon from Jewish mythology. She was the first wife of Adam in the garden of Eden. Whereas Eve was made from Adam’s rib, Lilith was created from the same earth as Adam making her his equal rather than his subordinate. This meant they clashed and so she escaped the garden of Eden, tired of Adam trying to dominate her. Lilith really represents a strong female character and so we thought this would be a great name to use in a female fronted band. The knight represents a character who stands strong alongside Lilith. He protects her from the angels sent to try to take her back to Eden. The knight is represented by the rest of the band.

Awesome, it seems rather intellectual! Who are your influences? Does everyone listen to similar music or musicians?

Everyone in the band has similar tastes, and there are certain bands like Led Zeppelin, Black Sabbath, System of a Down and Slipknot where our influences cross over, however we all have slightly differing preferences.

How do you describe your new single “Wake Up”?

“Wake Up” is a real guitar driven track. It shows both sides of Lilith’s personality. The more feminine side as reflected in the soft verses, and then the more aggressive side, which comes out in the choruses and breakdown. It’s about wanting to escape your surroundings, as Lilith did when she fled Eden.

Okay. Your amazing music video for “Wake Up” has just become live. It seems that you had to wait for a long time! How do you feel about it?

It’s so great to finally have the video out there for everyone to see. We’ve had a really great reaction from the public so far, and having the video out has made a few people that hadn’t heard of us come and check us out to see what we’re about.

“Wake Up” will be officially released on 22nd of April. You must be very excited about this!

We really are! The debut single is a big deal for any band. After months of groundwork you finally get to present yourself to the public and so it’s exciting and nerve wracking at the same time!

Could tell us your plans, will you go with several more singles being released first? Or are you planning to record an EP or an album next?

As it stands, we are planning on releasing another single after Wake Up, and then we will see what happens. We’ve been writing a lot recently and have quite a few new songs, so releasing an EP with a supporting tour is definitely something exciting that we’d love to do.

Looking forward to it!
How do you go about writing your songs?

For the most part, the songs start from a guitar riff that either Adam or Stephen come up with, normally a verse or chorus part, although occasionally the majority of a song. The idea is then brought to the rest of the band who all come up with their own individual parts, and then we arrange these to get a basic skeletal idea of the track. Lilith then will start working on melodies and lyrics, and we’ll bring everything together and decide together if the track needs anything else.

It seems you are doing the right thing as it is definitely working. Do you have any shows already planned for the near future?

That’s great! We are really looking forward to seeing your live soon! Is there anything else you would like to say?

Yeah, a massive thank you to everyone that’s supported us so far. We will be putting updates about the release and other band news on our social media and website, so stay tuned!

Thank you very much for your time! Good luck! 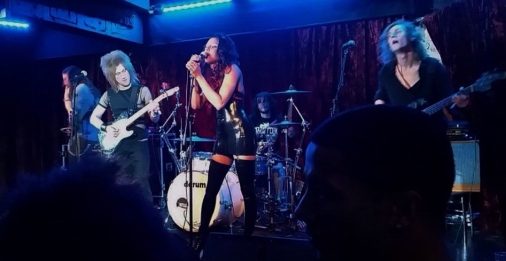 To find out more about Lilith and The Knight, visit their sites using the links below;