Artist: The Hemingways
Date: 26th May 2017
Venue: V-Bar, Colchester
Debut Single: Never Alone
Release Date: 24th March 2017
On a nice Summer night on the Friday just before the Bank Holiday weekend, also the last day before the half-term holiday for some, I drove up to Colchester in Essex, excited to be at The Hemingways‘ hometown show.

When I arrived at the venue, the place was already packed and there were some familiar faces from other bands that are known in the local music scene. It’s great to see these local bands support each other and enjoy their events. After one of the support acts, there was a minute’s silence, then a minute’s noise, as a respect for the people who were involved the unfortunate incident in Manchester earlier in the week.

Soon after, following the announcement introducing the next act, The Hemingways, a mighty roar rose in the venue. When the opening song “Never Alone”, began, everyone started moving, and as the lead vocalist James Burrage started singing, the crowd started singing with him. “Never Alone” is the band’s debut single, which was released a couple of months earlier, so all the fans knew the song. It’s a fantastic song to sing along too and I must say it was a very strong opening. After the song, James told with a big smile that he was wearing shorts and it was a right weather for it. Because one of the audience, Jon from the band Vera Lones arrived at the venue in his shorts and wasn’t allowed in with shorts. Therefore James offered Jon his jeans, and funny enough they were the same size! Everyone laughed and smiled too.

They played 4 more original songs; Living A Lie, then Keep On Running, Complicated More Than This and Want It All, followed by the cover Fire/ Humble. The crowd never stopped dancing. Through the set, Ben Butler‘s slightly jazzy keyboard playing added colour to the band’s songs while drummer Jack Ames and bass player Noah Henry played a slick accompaniment to James‘ authentic and soulful voice. This young band’s music is crafted out of many elements, and I believe that the brilliant guitarist, Louis Takooree, contributed his talents to their music considerably. Over all, it was one of the most enjoyable gigs I have been to so far. I would be more than happy to see them again in the very near future. 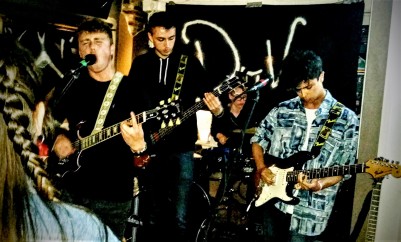 The Hemingways are a five piece indie / alternative rock band from London and Essex. The quintet cite influences such as John Mayer, Kings of Leon and Led Zeppelin. Despite most of them still being in their teens, some members have been playing together for close to 10 years, resulting in a musical chemistry not unexpected from of a band of their age.

2 thoughts on “The Hemingways – Live Review”