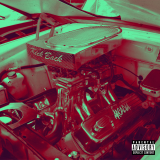 Hailing from Manchester, rap-metal quintet Arcadia are releasing their single “Kickback” on 13th April 2018. As the track has been given a fair amount of airplay already, you might have listened to it.  This new song is the most powerful song they have ever recorded. The pace is much faster and the vocals push forward more than you heard from their debut EP “Hunting Season” which was released in September 2016. You will definitely feel their energy through this track. Get on the floor when you play “Kickback”. It’s an absolutely banger by a band that have a great future ahead.

For fans of – Rage Against The Machine and Limp Bizkit 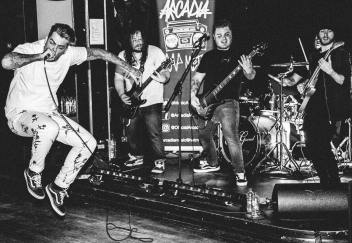 Recently, even with very short notice, the vocalist of Arcadia Tom kindly took some time out of his busy schedule to be interviewed by me. Here it is;

Hello, Tom! Thanks to talk to us today.

Thanks for having us!

First of all, could you tell us how you all met up and became a band?

It’s a bit of a weird one really. We all went to the same college, but didn’t really know each other until much later. Ollie, the drummer and Aiden, the bassist had other bands when Arcadia started, they even saw us play a few shows! After a two original members left, we really needed two people who were serious musically and had the same image. So after the departure of our drummer, Ollie stepped up and said he would audition and it didn’t take longer than 5 seconds to know we had struck gold honestly. Aiden came in about 2 weeks later, and a few years later here we are doing better than ever.

Awesome! How do you normally go about writing your songs?

The song writing process can either be the most stressful thing in the world of the easiest haha! It normally depends on if were trying to force it, which seems to never work out honestly, this is the question I always want to ask other bands! We normally just wait until one of us has a really good idea, and then we all chip into to help build on that project.

Okay. Who are your influences? Does everyone in the band listen to similar music or musicians?

Me personally is hip-hop, I’ve always been obsessed with it, there’s something about the beats, the music, the fans and just raw emotion that makes it. When I figured out I could do this with a band, I was like WHAT?! Haha, It just made sense. Everyone else in this band listens to different music. We all have so many different tastes! Literally from metal core, to hip-hop to jazz. It goes way beyond what people expect!

Probably that’s the reason why your music is unique. You are just about to release the single “Kickback”.  How would you describe this song?

The song’s just raw power, quick paced and upbeat, and it’s one of our favourite songs to play live, everyone on the stage going crazy and everyone in the crowd doing the exact same. It’s perfect for us. It always gets the crowd pumped and when we play its one of the moments where you feel in your own bubble.

My favourite too! Also “Heavy Rain” from your debut EP is my favourite  as well, it has totally different vibes! Well, I believe “Kickback” will be released digitally. Where can we find the song?

You can find our song on ALL major platforms such as ITunes, Spotify, sound cloud and Google play. Even shazam!

Great! I really enjoyed your debut EP “Hunting Season”. Are we expecting an EP or album following this single?

Thank you! That felt like it too ages to record due to all the changes we had going on at that time. The plan is to release this, and then go from there. We have some ideas in mind and know where we want to go, but we always change our mind haha! There will one hundred per cent be more music that I can tell you!

I can’t wait already! You must be very excited about the release! Do you have a special show planned for the release?

Yes! The single release show will be at Night People in Manchester on April the 14th, I urge everyone to come as its going to be a mental show. Loads of friends and some crazy good bands put together always make a good night. All the bands on the bill are insane so we can’t wait to play!

The release day is Friday the thirteen! and the big party is on Saturday, that’s perfect!  What should we gig goers expect from your live shows?

High energy, always high energy. We bring that every gig without failure, so I’m not afraid to promise that haha. It’s a very in the moment thing and I think the best bands are the ones who bring it live, so that’s something we always try and focus on. We practice every week so we can keep our live shows tight. I’d like to think we are not that bad live haha!

Super! What is coming from Arcadia next?

Just more shows, more shows, more music, more everything really, we are really on the ball at the moment and everything’s getting better. Our music has come a long way with song writing and performing, and the plan is to just keep going with everything and seeing where it gets us.

For sure. Is there anything else you would like to say?

Just a huge shout to yourself for this interview! A huge shout to all the people who have supported us from the beginning and the same to the people who are only hearing us. This band means everything to us and without them it really wouldn’t be worth it. So we are always grateful!