Auslander is the second full length album from alternative rock outfit Brain Ape. A band who has crafted a sound built upon a blend of stoner rock, indie rock, progressive rock and shoegaze. At nearly an hour long, the album provides an insightful journey through every nook and cranny of the bands musical ideas and influences. However, despite its length and vast scope, it never veers far away from the core principals of Brain Ape‘s sound, thick fuzzy guitar lines with busy drums and distinctive soulful vocals. This creates a real sense of cohesion throughout the album whilst still taking the listener through surprising twists and turns. From the huge Smashing Pumpkins-esque “Give Me My P45”, the icy wall of noise of “Stop Sulking” to the epic sweeping closing track “Hunger”, Auslander is truly a wonder to behold and does a great job of capturing all of Brain Ape‘s many strengths and brings them together to create a satisfyingly complete body of work. Roll on album three!

You can find the interview below. Check it out as well as listening to the album! 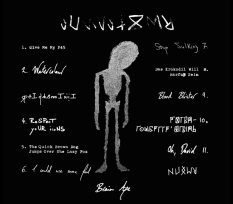 This week the band took sometime out to be interviewed by us. You can find out a little more about the band, their music and some part of their life.

Hi Brain Ape! Great to have you today. Could you introduce yourselves?

Sol: Hi, I’m Sol and I play bass in the band and occasionally do some vocal harmonies if Minky lets me.

Minky: Hi, I’m Minky and I’m not as totalitarian as Sol would like you to believe. I play guitar and pretend to sing.

Thank you. Sounds like a good start! This must be a boring question for you, but I’m always interested how you met up and became a band.

Sol: We actually met up in high school, and then continued being friends.

Minky: The two of us spent our sixth-form years together in Belgium and then both happened to move to London for university. I was itching to find musicians in London whom I could trust with my material and who better to call than an old friend?

Nice. How did you decide on Brain Ape as your band name?

Minky: We were initially going to call the band Bandwagon, but after finding out that there were a million bands out there with that name, it felt post-ironic to keep it. So, Sol and I went through a plethora of names before we settled on Brain Ape. I still have the notebook that has all the scribbles in it of us trying to find a name we liked.

Sol: It took a long while.

Eventually you’ve found the one. Who are your influences? Do you both listen to similar music?

Minky: It’s funny really, because Sol and I grew up on very different sides of the planet, and yet we seem to have been drawn to the same bands as teenagers. Bands like System of a Down, Slipknot, Alice in Chains, Them Crooked Vultures. I think a lot of that shows in the type of music we’ve made over the years.

Sol: Queens of the Stone Age, for me. Minky’s more hardcore than I am, and I think my musical tastes are more varied but it’s pretty much equal.

Minky: It’s funny, actually, I recently found some notes from when I was about sixteen where I express my envy for Sol’s diverse music taste.

Very interesting! As your band is categorised as punk, you enjoy a lot heavier music! How do you go about writing your songs?

Minky: The process is different almost every time, really. I think the only really consistent part is that the music always comes first, and then the lyrics kind of seal the deal.

Sol: Minky writes a track, I try to derail it and steal the key. Before, it was a previous band member who used to do that. In Auslander, I took on that role.

Okay. You have released your album ‘Auslander’ recently. What made you to decide releasing a full-length album?

Minky: It’s strange, really. We’re friends with a lot of people our age who are also in bands and they’re always quite frustrated that they’ve yet to release an album. For us, the decision to release our first album Dara O’, back in 2014, was the best one we’ve ever made. Made us realise that the only people stopping us from releasing music was ourselves.

Sol: For me and Minky, I think we both like the idea of leaving a legacy, a snapshot of the musicians we are, were, at the time of recording.

Minky: Speak for yourself.

Awesome! How would you describe the album?

Sol: Queens of the Stone Age meets Bowie’s vocals, all stewing in a pot of punk attitude with sprinklings of grunge and American style punk music. Think Black Flag.

How important are the lyrics to you? And what is your message through the album?

Minky: Lyrics are a funny one, for me. They’ve always been very important, and I’d never release a Brain Ape song without really slaving over the final pen and paper. But on our first album, we really wanted to highlight the general mood and tone that we were going for, and so the vocals took a bit of a back seat in the mix. That had a huge effect on Auslander, because this time we really felt it was time to give the lyrics a bit of space to do what they do best.

Sol: They give a track character apart from the instrumentation, whilst also combining with them to create something unique. But that’s all really Minky’s department, anyway. I just sing where the big boss tells me to.

Minky: Auslander is the first time I’ve written an album that has a linear progression throughout the whole record. These aren’t just a bunch of songs that sounded okay together, there’s now an idea that strings them into a lose narrative. That narrative is for each listener to make of it what they will, either consciously or not.

I see. Do you have a favourite song?

Sol: Because it sounds like Godzilla is coming to wreck some shit. And Graphomania because I think it’s the grooviest song we have ever done.

Minky: I always find it really difficult to pick a favourite.

I suppose being asked which child of yours is your favourite one!

Minky: Most of these songs were written over two years ago, and I’ve spent so much time with them that I get far too attached to them. But I tend to always include a relatively fresh track somewhere in the track listing, and this time that song was Hunger. So I suppose that’s the song I’m still most excited about. The vocals on that track were mixed by our good friend Ryan Stephenson and I really love what he did to them. I think it’s progression for Brain Ape in the right direction.

Thanks for sharing your thoughts. Well, I’m dying to see your live! Do you have any gigs already planned?

Minky: Unfortunately, we currently find ourselves drummerless. The drums on Auslander were performed by the fantastic Jacob Powell. But alas, he was unable to stay in the band for very long. So if you know any drummers who would like to try out, please do send them our way.

Oh, I hope you meet someone suitable soon. What I want to know is… what should we expect from your live shows?

That’s encouraging! What has been the highlight so far?

Minky: We’ve had some relatively good airplay with the lead single, so far. People seem to like Give Me My P45, which is nice I suppose. But for us it’s never really been about how other people respond to the music we make. It’s always been about how we respond to it. This is our second album as Brain Ape, and a couple of years ago Sol and I put out another lo-fi album with Sol’s side project A Twisted Carnival, and I would never take back any of those records. Why would I? They’re history that we’ve made as very close friends. As Sol said earlier; they’re a snapshot of who we were as people and what we were going through and to me that’s the magic of music, really.

Sol: For me, the car ride to and from Scotland to record the drums for Auslander was the highlight.

Minky: There’s a video of us recording the album, and that video will be coming out soon. The car ride was very good fun.

Great! Is there anything else you would like to say?

Minky: Always play our music as loudly as possible! That’s the way it’s meant to be listened to. As the great Ziggy Stardust once said: “To be played at maximum volume”.

Thank you for your time! Good luck!

Minky: Thank you very much for having us. 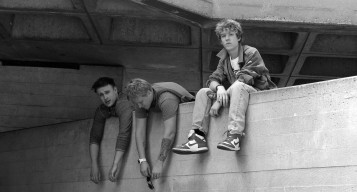