Hailing from London, a three piece rock band Brain Ape are going to release their music video for ‘Graphomania’ on 11th March 2018. It’s been 11 months since the band released their last music video for ‘Give Me My P45′, a new video is absolutely wanted by their fans. ‘Graphomania’ is the third track of their album ‘Auslander’ which was released in August 2017. The track is rather mysterious to me. It begins with the vibes of something like the calm before the storm, and has the flavouring of very early Radiohead and Nirvana. We interviewed Brain Ape again recently, which can be found further below. We will add the music video here on the release day. (But a sneak peak is below)
(*Note: The new video has been added below the interview.) 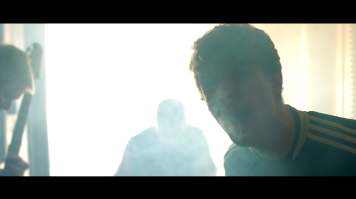 With such a short notice, Brain Ape accepted to be interviewed by us. Here it is. Enjoy!

Hello! How have you been since last time we talked? I welcome you, Jamie! I hear you had a show in Paris last week?!

Jamie: Hi. Yeah, we did. Paris was cool. It was my first time in Paris, so it was quite exciting. The venue was cool.

Minky: Malina Molgan was the show’s promoter and she was really good to us, even though we had quite a few upsets to do with vans getting towed and missing soundcheck because of that. She was really understanding. We also had some mishaps with guitar straps breaking –

Jamie: And guitars getting obliterated.

I suppose anything can happen! And yeah, I heard about Malina how good she was recently. Today I want to talk about your forthcoming video. Is that okay with you?

Minky: We’ve got a video coming out on the 11th of March for our new single ‘Graphomania’, which featured on our second album which came out last year. We recorded the video at the False Heads rehearsal space –

Sol: Which was really cool of them. They lent us their space to film, and it looks great.

Minky: We had Cody Leigh-Stannard film it –

Sol: It’s the first time we’ve had an actual filmmaker shoot one of our videos.

Minky: Usually we do it really DIY, but for this one we wanted something a little more polished and professional.

Okay, interesting. It hasn’t been a long since you released the album “Auslander”. You don’t stop, do you?!

Jamie: We plan on conquering the world.

How would you describe this song?

Sol: Well we’re not. But they’re a part of our roots. Our sound comes from them a lot.

Jamie: But I see what you mean. You don’t wanna be labelled as a Nirvana cover band.

You can read the article later to find out what I think. Well how did you come up the idea for this video?

Minky: Actually, it was Sol’s idea and it worked really well. It was shot in a really lived-in rehearsal space, so it goes along with the whole Brain Ape ethos of ‘music sounding like it’s coming from people and not computers’. The video ended up having our DIY aesthetic to it, even though we didn’t film it ourselves.

You must be very excited about releasing the new video! Does this lead to another album or EP?

Sol: No, it’s more to promote ‘Auslander’ than anything else.

Minky: We still think ‘Auslander’ has a lot of life left in it. It’s still got a lot of tunes that people aren’t really aware of. People seem to only ever pay attention to singles, which is a bit of a sad truth. But I suppose that’s the way the world spins. We wanted to highlight some of the other textures that the album has.

Sol: A track that feels different to ‘Give Me My P45’. It shows off Brain Ape’s range.

Sure, I get you. Your album ‘Auslander’ is so deep with, how many tracks, 12 tracks?

Could you tell us about your upcoming shows?

Minky: We’ve got a show on the 10th of March, at ‘The Water Rats’ in London, near King’s Cross. We’re very excited about it. It’s a hometown show, so we’re hoping to see some very familiar faces. And from what we’ve heard, people are pretty excited to see us play.

Sol: There’s a really good buzz about this show.

Minky: We’re hoping to make a lot of noise.

Minky: I won’t smash a guitar this time… I don’t think.

Sol: Yeah… That’s what he says.

Minky: I am notorious for being unpredictable, and yet cliché.

Wish I could make it though. What is coming from Brain Ape next?

Sol: You’ll have to wait and see.

Okay. Is there anything else you would like to say?

Sol: Look out for the single release on the 11th of March. Oh, and you can buy our merchandise at www.schlimbumrecords.com/shop

Minky: If you want a t-shirt, you’d better hurry up. They’re all selling out.

Sol: And you can still get a physical copy of ‘Auslander’ from there as well. And if you like what you hear, head on over to our social media in order to support us and stay up to date with what we’re doing. We’re on Facebook, Twitter, Instagram. All that good shit.

Minky: And the new Schlimbum Records website, which is looking funky.

Great! Thank you for your time! Good luck!

Minky: Thank you very much. And thank you ever so much for having Brain Ape played on EGH Radio so often. It’s been really flattering, and we can’t thank you enough really.

Also you can read our review on Auslander album and our first interview from November 2017: Click here