Today, I am sharing the music from the heart of London, Camden Town.
The Salvador Darlings are an electronic pop / trip-hop group based in London, UK, who capture the sounds of the amazing city and incorporate it into their music. Vocalist Carine Fierobe, originally from Paris, France, adds her powerful and seductive noir-esque vocals over the slow, elastic beats created by instrumentalist and producer Bryan Borcherds.

The Salvador Darlings, with their ‘old fashioned’ sound do a lot of their recording around London at iconic locations. Borcherds says, “London is such a magical city full of history and energy, so instead of spending our lives in the studio to create the music we record at iconic locations, for example our debut track, Show World, we recorded additional vocals in Trafalgar Square at 11pm on the coldest night of the year. The atmosphere of the fountains and buses chugging by sounds great”.

You can watch the video of making “Show World” on YouTube;

We had a chance to interview The Salvador Darlings just before the single release, which we can learn about their music creativity.

MM: Hello, The Salvador Darlings.
First of all, can you introduce yourselves? Your names, your roles in the band, and your interests, hobbies, that kind of thing?

Carine: Hey, I’m Carine Fierobe and I’m the singer of The Salvador Darlings. I’m also the writer of the lyrics and composer of vocal melodies. Bryan Borcherds is the music composer and takes care of all musical and recording parts.
I’ve been passionate about music since I was a very little child so my hobbies are mainly about music, singing, playing guitar, writing lyrics, dancing… I also love nature and it’s good sometimes to take a walk when it’s a sunny day, because yes, I’m addicted of the sun! Also socialising, films, and so on.

MM: Could you tell me how The Salvador Darlings was born?

Carine: I’d just moved to London from Paris (France) in November last year (2014) so I was looking for a new musical project here. I saw a good advert on a website for musicians and I contacted the person to find out the kind of sound they had in mind. I immediately fell in love with the atmosphere he creates and a lot of ideas for vocal melodies had come to mind, so I wanted to see who this Bryan guy is. When we met each other we instantly had a very good feeling, the same motivations and desires in music, so I’m very lucky to have met Bryan in the first month I moved to London!

MM: The band name, The Salvador Darlings sounds rather artistic. How did you decide it as your band name?

Carine: The name is a good reflection of us. Quirky, arty, slightly crazy. It sums up the music quite well too, but most of all we just liked the name.

MM: Who are your influences?

Carine: Anything that moves us, it could be old school hip hop or jazz or classical, if it has the right feeling then that’s what we like. When writing our own music it usually starts with a drum beat or synth line, or a vocal melody, and if we find ourselves nodding our heads to the beat then we keep on going with the song. So to answer your question it’s not a style or band that influences us, it’s the groove and feeling.
We are also very influenced by the city we live in, London. There’s so much magic and mystery, the history, people, and weather influences us. The recording isn’t just done in a studio, it’s recorded out and about in London.

MM: How do you go about writing your songs?

Carine: Personally when I create melodies and write lyrics it comes very naturally to me. The first notes of Bryan’s compositions instantly inspire me, I record my first ideas quickly on my phone. The words come to me during this time and I already know what this song about. I enjoy it a lot, this time of creation, because when I sing my own images and emotions it’s authentic and true.

MM: Your debut single is going to be released within a few days. How do you feel about it?

Carine: Very excited! I’m very excited to share Show World with you and your Music Matters readers, we’ve had a lot of fun writing and recording it and hope you’ll enjoy it as much as we have enjoyed making it.

MM: Could you tell me how the recording went?

Carine: The song was actually written very quickly, it had a good vibe to it so we just sorted out the structure and then Bryan produced it. Everything was done in our own studio except the vocals that was recorded in Soho, London.
After the studio vocal session we went to Trafalgar Square on the coldest night of the year, at just before midnight, to do some outdoor recording. With each song we want to capture some of the magic of London, so in Show World if you listen out carefully you can hear the noise of the fountains in Trafalgar Square, London buses roaring by, and even a security guard asking what we’re doing with a recording setup so late on a freezing night!
Show World was mixed and mastered by Neil Wilkes, who earlier this year was nominated for a Grammy with his work with Imogen Heap. We’re very happy with the way it has turned out.

MM: I’ve heard that you’re preparing for your debut album. What sort of stage of the process are you right now?

Carine: Yes, it’s great that Show World is now out there and we have quite a few songs that are nearing completion, probably another five or six. A little bit more instrumentation and production, some studio time, and we should be nearing the completion of a full album. We’ll probably release one or two songs exclusively to our fans as a thank you, and the album later.

MM: How would you describe the album?

Carine: The way I write is very full of imagery. Everything is imagined quickly and I try to transcribe it with words. Sometimes it’s very difficult to find the good ones to be closer to what I would like to share. Show World is all about our world, the difficulties and the causes; the way we think or the things we think or want to know; the way to become someone unique, to share and to link our experiences; the way to feel happy and accomplished. The kinds of questions which haunt us constantly. That’s why we create characters like masks behind we hide and our social reality is just fictitious and impersonal.
The other songs vary, it might be about a feeling, an experience, something honest.

MM: What is the expected release date?

Carine: We’d like to release an EP just for the fans, and a full album later on. The EP should be ready towards the end of 2015 and the album early 2016.

MM: Do you have any plans for your live performance?

Carine: Performing live is something we thoroughly enjoy doing, it’s fun but also amazing to meet the people who are listening to our music, those who interact with us on our website or Facebook, we’re honoured to meet them in person. The full band should be ready towards the end of the year, we are enjoying the writing and studio life a lot (probably because it’s dark and anti-social!) but yes, the live band will happen when we’re ready.

MM: Well, is there anything else you would like to say?

Carine: Just thanks for this great interview, thank you so much for your support!

MM: Thank you very much! Looking forward to listening your EP soon! 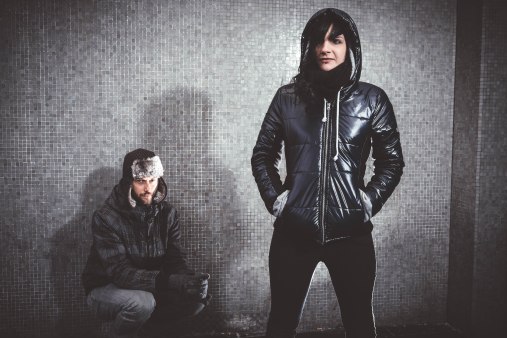