Today I’m sharing music from a Welsh post hardcore band,  Breathe In The Silence.
This track “Feathers” is their latest single. They have brought a fresh sound to their music after nearly a year since their previous release. Though this song is not as heavy as some of their other songs, unique, delicate guitar riffs are still present in the tune just as they always have been. However, this time it sounds sharper and more edgy, which is largely contributed by the vocals. This track has a strong alternative rock flavor.

Breathe In The Silence released their self-titled EP “Breathe In The Silence” in April 2014. This 5 track EP shows their ability to contrast the sound of their hard and heavy side and their soft and slightly mellow side. Although it is their debut EP, it is well crafted. It is now free to download exclusively through BandCamp.

Breathe In The Silence are known for their catchy and powerful songs, and passionate live performances. They have had the opportunity to play with many bands including Taking Back Sunday, The Blackout, Sikth, Close Your Eyes and Sworn In and For The Fallen Dreams.

In the 3 years that Breathe In The Silence have been together, the band has received airplay nationally on BBC Radio 1, Kerrang Radio and Cardiff Radio, and also received magazine coverage for their new single ‘Feathers’ on the cover CD of Metal Hammer. Breathe In The Silence were one of eight bands to reach the Red Bull Stage at Download 2014 as part of Red Bull’s ‘Live At Download’ (Ex ‘Bedroom Jam’) competition.

Recently Breathe In The Silence have completed recording their second EP, and so now the quintet are set on travelling the country as much as possible, to bring their unique blend of post-hardcore to a wider audience.
Their next live show is for Shield Festival 2015 in Swansea this Saturday 18th of July.
http://www.shieldfestival.bigcartel.com/
Check their Facebook page for more information about their exciting live shows! 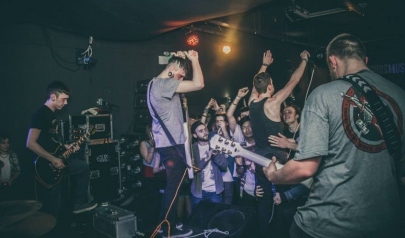 Find out more about Breathe In The Silence, visit their sites using the links below;